I figured that because I posted the 18 best things I ate in 2018, it only makes sense I keep up the tradition this year! I had so much fun looking back on all of my travels and the wonderful things I got to eat and drink. Narrowing it down to just 19 was extremely difficult, and I didn’t even include any of the foods I’ve eaten since I moved back to America because I really wanted to honor my last year in Germany. Hope you enjoy this culinary rewind of 2019! 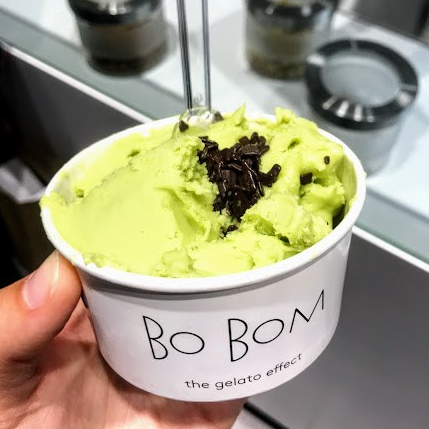 I took multiple trips to Italy in 2019, but my favorite gelato by far was from Bo Bom in Palma, Mallorca, Spain. Honestly the whole island had a food scene that was worlds ahead of the rest of Europe as far as innovation and modernity, so gelato flavors like avocado aren’t necessarily unheard of. It had that perfect creaminess and mild, fatty flavor of avocado that paired well with some chocolate chips.

There are tons of food options at the bustling Camden Market, but getting the macaroni and cheese from here was a no-brainer. It’s my favorite food and one that I don’t get to eat often in Europe. They use my favorite noodle shape, cavatappi, and a creamy, super cheesy sharp white cheddar sauce, topped with breadcrumbs for some texture. They serve mac with fun toppings, but after trying a few kinds, I decided that simple is best with no toppings at all! 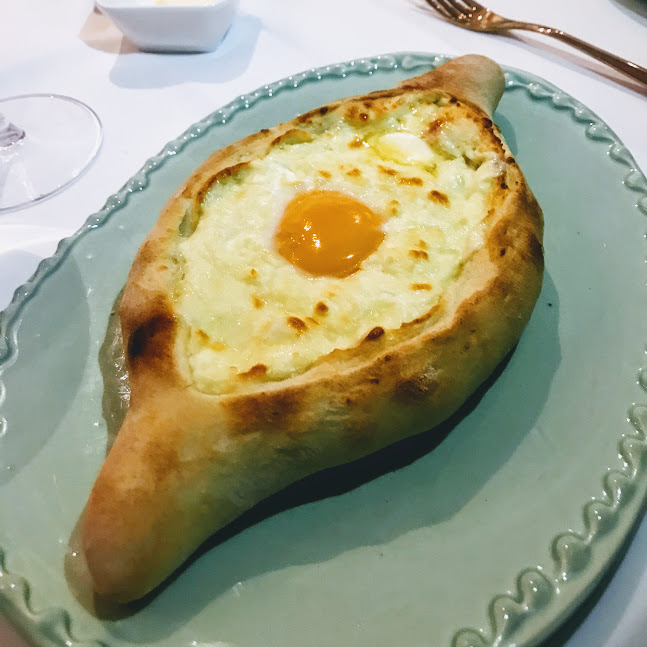 I’ve been wanting to try this Georgian cheese bread for quite some time, and when I found out there were multiple Georgian restaurants in Frankfurt just 30 minutes from where I lived, I had to have it! The cheese has a salty, briny taste like feta, and the bread tastes just like pizza crust. I’m not sure why this isn’t more common in America because I know it would be a huge hit!

We wandered around for 20 minutes trying to find a restaurant open in Cefalu in the off-season (November) and stumbled upon this one. Well I’m glad we did because I got to have this Sicilian specialty which also happens to be one of my favorite pasta dishes. The white clam sauce had amazing flavors of garlic, lemon, and olive oil without being overpowering, and the handmade bucatini took it to a totally new level. Only problem was there wasn’t enough of it! Sigh…maybe I should have just ordered two. 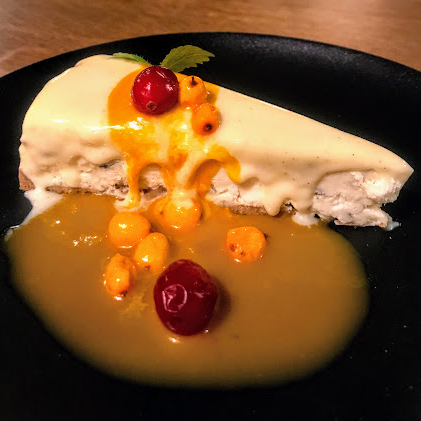 I had one of the best meals of my life at this restaurant, and that is partially because of the dessert. It never really occurred to me that cheesecake could be made with blue cheese but apparently anything is possible! This is only for people who enjoy the flavor of blue cheese; otherwise you’re probably cringing right now. The cake wasn’t sugary at all, so it almost could count as a super creative cheese course, which I am not mad about! It had a fruity sauce from the sea buckthorn berry, a popular plant in the Baltic region. 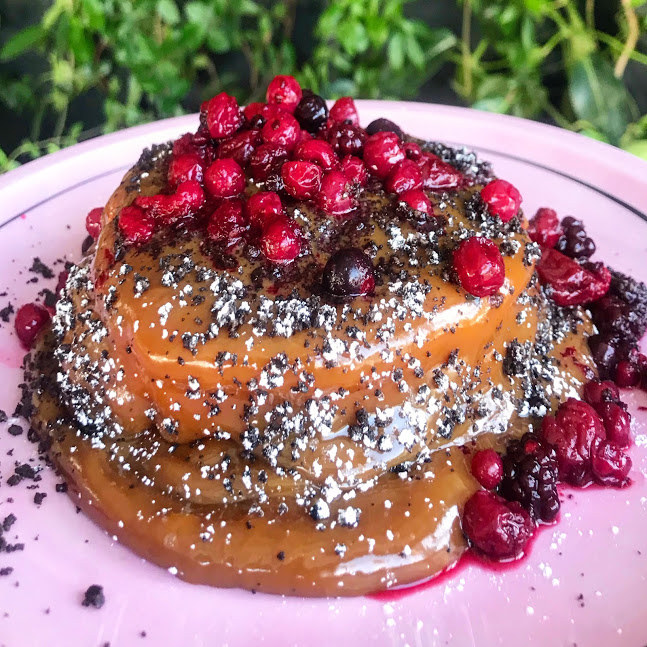 Honestly the pancakes were slightly dry, but the toffee cream was THAT good that this breakfast is still making the list. The pancakes were drowning in the sauce in the best way possible, so if you’re a toffee lover like me, this is heaven. The stack was finished off with Oreo crumbs and some tart berries—I just loved how all the flavors worked together. 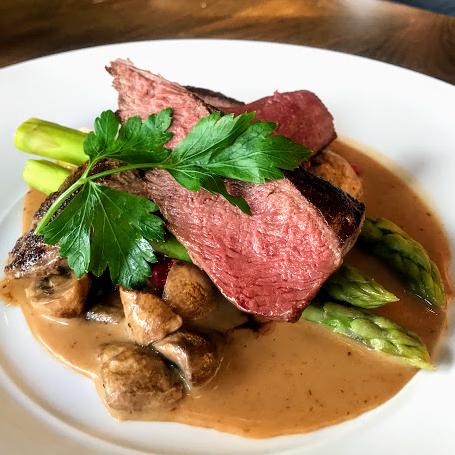 I loved this restaurant because it had traditional Norwegian dishes that were executed very well. In Norway, reindeer is a delicacy, so naturally I wanted to take part in the culture and try it. The meat was surprisingly tender and had a mild, not too gamey taste. It came with a comforting gravy, veggies, and lingonberries (I believe; honestly, the berries in Europe confuse me). If you’re interested in trying exotic meats, this is a great place to start. 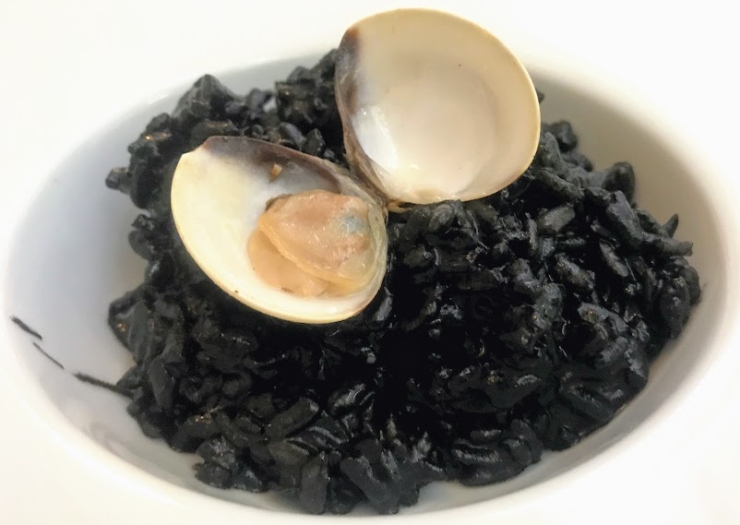 You can’t go to Croatia and not try its national dish, cuttlefish ink risotto. I tried this dish in several restaurants (and countries actually), but my favorite was at Marco Polo because of how intense the squid ink was and the texture—the rice had a nice bite to it and wasn’t too soupy. It probably sounds and looks gross, but I really love the rich seafood taste ink brings to dishes like pasta and risotto. 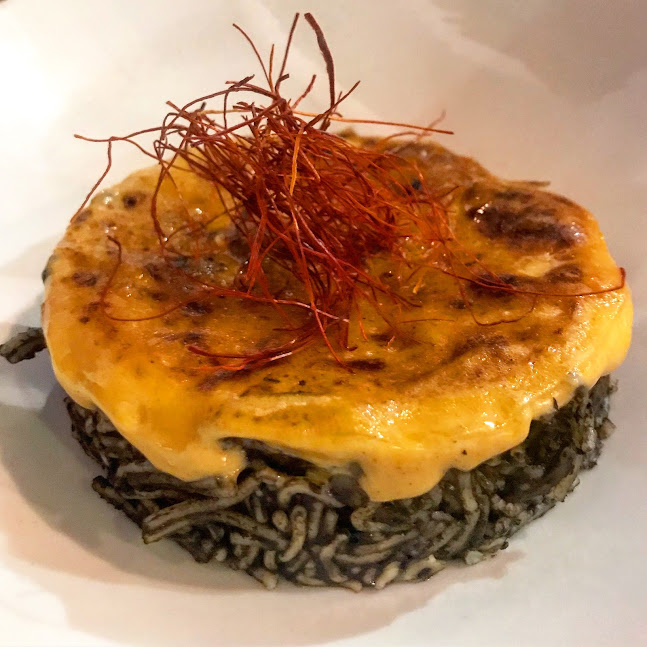 While on the topic of cuttlefish ink, another to-die-for dish was these noodles. I’m pretty sure the title of the dish is an error in translation, but there were certainly no errors in execution for this dish! The tiny noodles, called fideos in Spain, were mixed with the sauce and chunks of cuttlefish, and then topped with a red paprika aioli. It was a super rich dish but so unique that I am still to this day dreaming about it. Their goat cheese cigars were also heavenly, but I can’t put two things from the same restaurant on one list.

Let me start by saying this is the cutest, most amazing restaurant ever. The woman who owns and runs it is so friendly that I just had to go back when I went back to Lisbon this year, and I recommend it to everyone. In November 2017, my mom ordered the octopus and I tried a bite and fell in love. So of course my second time around, I ordered the octopus. It had balanced flavors of lemon and olive oil, and when I think of Portuguese cuisine, I think of this dish. 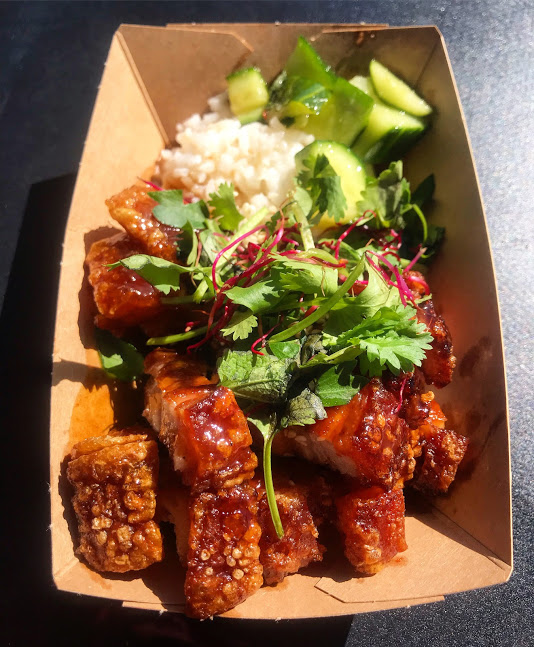 I got to try this amazing dish from this Frankfurt-based food truck at a street food festival in Mainz. I’m not quite sure this was the real title of the dish, as it was written in German so I didn’t fully understand it, but my goodness it was the most perfectly crunchy pork belly! I loved the garlicky and sweet flavor of the sauce too. I wish I could have made it to the next street food festival just to have more of this.

For some reason, I think this year was the first year I really had burrata, but any opportunity to expand my cheese horizons is worthwhile to  me! The Amalfi Coast region of Italy is known for its burrata and buffalo mozzarella, so we had a ton of fresh caprese salads on this trip, and this one was my favorite. This place also had a ton of delicious pasta dishes, so you really can’t go wrong here.

This combination of flavors was the best birthday dessert I could have asked for. I originally saw this place on the Netflix food travel series “Somebody Feed Phil,” where Phil got to try some really interesting flavors. I loved how different these were—they basically tasted like bread and butter in ice cream form. As someone who doesn’t like super sugary desserts, this hit the spot for me. 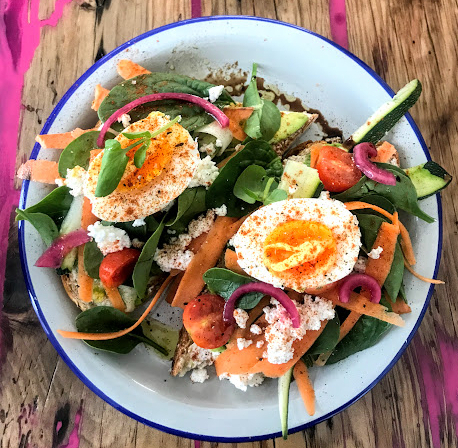 I’ve had a lot of avocado toast over the course of 2019, but this one really stood out because it came with a soft-boiled egg on top, salty feta, and a bright, fresh salad of raw veggies. We went here three out of our four mornings in Lagos, and I had the avocado toast every single time.

Sorry in advance for not having the name of this cafe. We basically just saw the massive cannoli in the window and ran in without paying too much attention to the place. Cannoli originated in Sicily, so it only makes sense the best one I’ve ever had was in the adorable town of Taormina. We also had cannoli at the airport that were incredibly delicious, so it seems like you really can’t go wrong anywhere on the island.

I feel like France is stereotyped to have the best pastries, but these Scandinavian rolls blow everything else out of the water. They come with a variety of flavors including vanilla, cinnamon, pistachio, and almond, but the most interesting and tasty one to me is cardamom. Vete Katten in Stockholm was a coffee shop with tons of options, but I’ve had variations on this amazing pastry in Copenhagen, Bergen and Helsinki as well.

I am so glad my mom and I went for the long day trip out to Luxembourg for the Christmas market because this restaurant on the main square converted itself into a Swiss chalet serving all sorts of delicious cheese dishes. Älplermagronen is a Swiss-style macaroni and cheese served with apple sauce on the side. I had it at Hüsi Bierhaus in Interlaken, but I actually liked this version even more (both were incredible) because it had blue cheese in the sauce, giving it a really interesting sharpness.

I have always loved calamari and definitely have tried it grilled before, but this meal really kickstarted my “grilled calamari” obsession where I began to order it whenever I could. Luckily I found it at the Greek restaurant that was around the corner from my apartment in Wiesbaden, but nothing will beat this initial tasting, where the dish was flavored with nothing more than olive oil, salt, garlic and lemon. Plus this whole plate only cost about $8, so it was affordable too! 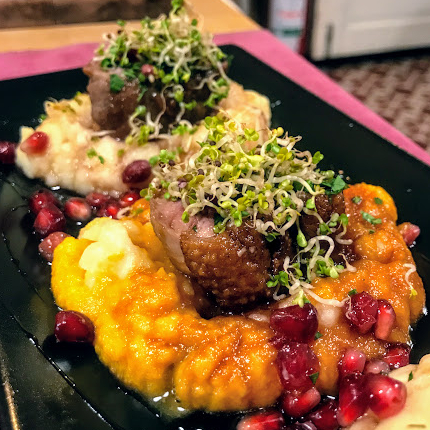 The constant craving for duck is too real. It’s definitely my favorite kind of meat. This restaurant had an overwhelmingly huge menu that I had to view on an iPad, so as soon as I saw they had roast duck, I was done searching for anything else. It came with mashed potatoes and sweet potatoes, sweet wine reduction, and pomegranate seeds, and I must say that there wasn’t one thing I would change on this plate. I also enjoyed this plate by myself, as I was traveling alone in Bucharest, and for some reason I just felt so relaxed and happy while eating it.